POST-APOCALYPSE IS THE NEW CRUSOE

If you were stranded on a desert island, what sci fi genre would you take with you? With a surge in video games, movies, comics, and novels, it might be post-apocalyptic. But, most people haven’t realized that the post-apocalypse is just the deserted island castaway story all over again. In an era where the Galapagos Islands have to limit the number of tourists, and Mt. Everest has had 169 people climb it in one day, the idea of uncharted land seems laughable. Robinson Crusoe was one of the first English language novels, and was popular enough to spawn two sequels, and imitators like Swiss Family Robinson, and Gilligan’s Island. With the globe fully mapped, the only places left to explore are fictional islands like in Lost, or beyond Earth like in Lost in Space.

Enter the post-apocalypse, where you get to rediscover the same land, only with a twist. We know New York now but what will you find after the fall? Cockroach people fighting mutant pizza monsters? Baseball Furies on Central Park Zoo animal-led hot dog cart chariots? It’s familiar and new at the same time.

Why does isolation resonate with us now? With more than half the world living in urban centres, we brush up against stranger’s lives every day without forming connections, like we would form in a small town. Despite being amongst people, we often feel alone. (Notice how most post-apocalyptic stories use the city as a place to fear, where the small town/wilderness is safer.) Yet we are connected to family and friends constantly, through smart phones. But sometimes that feels smothering, and we crave the days when your boss, parent, or spouse couldn’t get ahold of you 24/7. And sometimes the good connections feel falser, chasing “likes” and “favourites” instead of personalized discussions. Add to that an anxiety about being ignored when the whole world can see you (no replies yet? have I been blocked from everyone’s wall?),  and the modern world is all about the tension between too many people, the wrong kind of people, and a lack of connection. Meanwhile, characters in the post-apocalypse have friendships so strong that they are literally of life and death importance. That’s a powerful fantasy to help explore your anxieties. 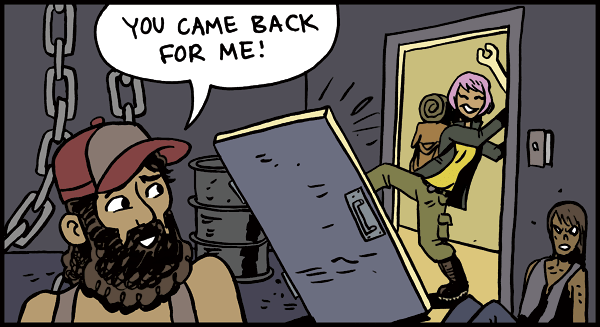 Isolation is linked with our fear of the other. On Lost, they literally called them “the others”. Since we don’t know our neighbours, it makes sense we still have that anxiety. Robinson Cruose fears the dark-skinned savages who sometimes come to his shore to eat each other. Yet in a globalized world, race is much less of a mark of otherness. America has a dark-skinned president. Calgary has a Muslim mayor. Racism isn’t gone, but it isn’t the easy-push fear button for everyone. Instead, the post-apocalypse allows the other to be your fellow countrymen, which recalls one of America’s point of pride, the American Revolution. It lets you indulge in the fear you’ve been harbouring that your neighbours are the devil. It’s especially viable in an age with such polarized politics. 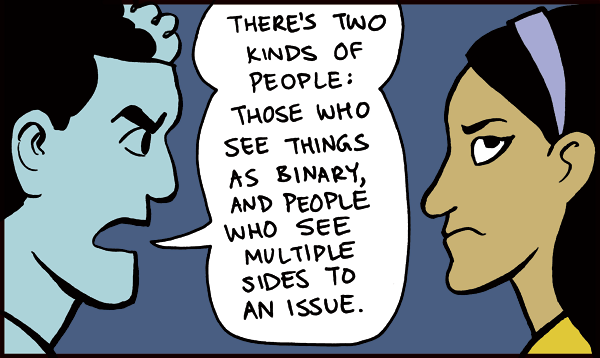 Or even better, instead of dark-skinned flesh-eating cannibals, you can use rotting-skin flesh-eating zombies. They are an all purpose punching bag, who’s race is not important. And since they’re not real (even more so than racial distinctions) it’s not really offensive. It also places the idea of cannibalism into an area of moral absolutism. People who eat people are the bad guys. It lets us retain some order in the chaos of after the system has been destroyed. 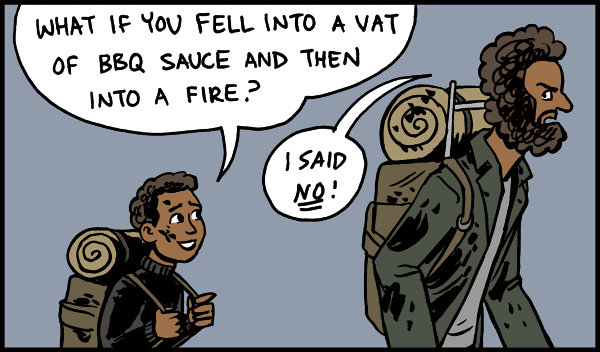 Who actually knows how to survive in the wilderness, on a deserted island any more? It might have been a fantasy that a middle-class Englishman would have survived, but at least it was remotely plausible. Today, we know what music and books we’d bring, not how to actually build a fire, tell poisonous plants from food, or construct a shelter that could withstand more than a gnat’s fart. But forget the exotic deserted island, in the post-apocalypse, you’re only scavenging the familiar. Everything is free, and you just have to decide what is worth carting around with you. You’ve been practicing for this your whole life, at the mall or flea market. Lighters make your fire, labelled cans identify your food, and you’ve got tools to add simple barricades to buildings that will already keep the weather out. 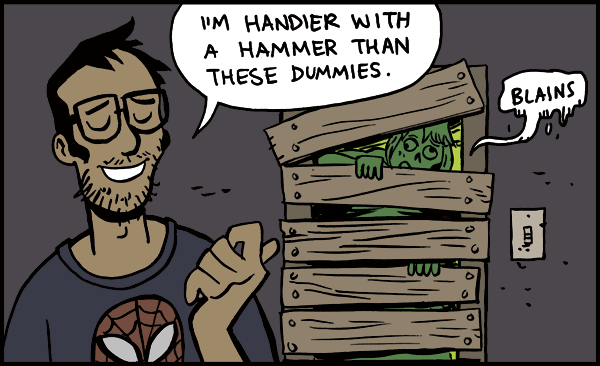 Plus, you finally get to put your hours of video games to work. America invented the first-person-shooter and creates more of them than any other nation. Add in some third-person shooters and survival horror games and you’re set. You basically are peace-time training to become a citizen hero, who uses guns to shoot obvious bad guys, while scavenging for items to ensure your survival. They joked about it in Shawn of the Dead. It’s a dark wish that all those hours of Resident Evil, Half Life 2, Fallout 3, and Left 4 Dead haven’t been a waste. 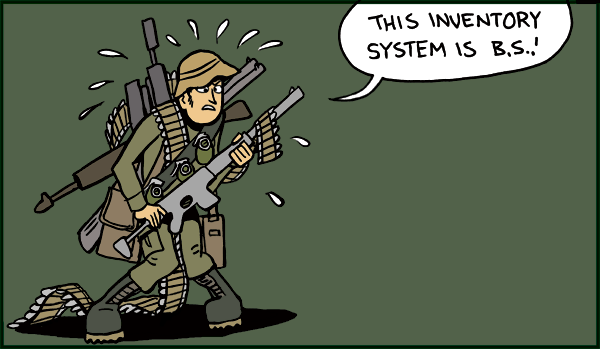 Most post-apocalypse stories still feature some sort of capitalism. There’s Bartertown in Mad Max: Beyond Thunderdome, there’s a bottlecap currency in the Fallout games, and the main point of The Postman was the re-establishing of trade and communication after the fall. If scavenging is basically bargain hunting, then there is plenty of capital left for it to survive on, and it breaks down some of the isolation, suggesting that there is a way society will be rebuilt. At the end of Fukiyama’s history, polarized left and right at least agree that some form of capitalism is the winning solution. It’s both comforting and thrilling to think that shopping will survive with the cockroach. 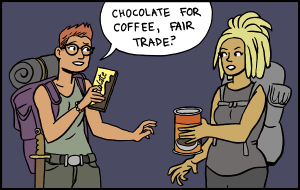 With communism out of the picture, the next war isn’t going to be with mother Russia, but with mother nature. The news media and our environmental agencies have been warning/scaremongering us that our real enemies are rising tides, fuel shortages, overpopulation, diseases, food shortages, etc. Yet they don’t suggest a vision of the future other than the same (but with less consumption), or apocalypse. So its easy for us to imagine that it will happen. 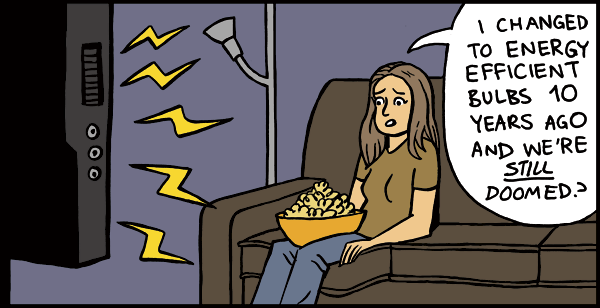 So where are the compelling visions of technology saving us? Well, science fiction writers have mostly given up on optimistic, enchanting grand ideas like flying cars, space travel, and robots. Instead, it went inward, in favour of deep exploration of previous concepts. (Thank goodness Neal Stephenson is getting SF writers and scientists together to get back to that era a of “moon shot ecosystem”). 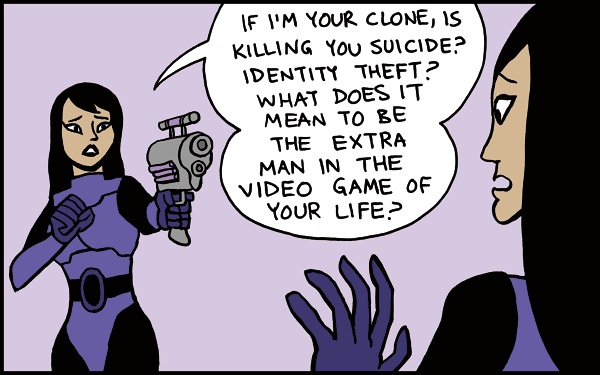 And real world technology seems to be updating so fast that trying to imagine what will be on the market in 5 years time, and how it will interact with whatever else is out, is mind-boggling work for the average joe. Rather than trying to guess what might be around the corner, it’s easier for readers (and writers) to just say “way less stuff” and set it in the post-apocalypse. 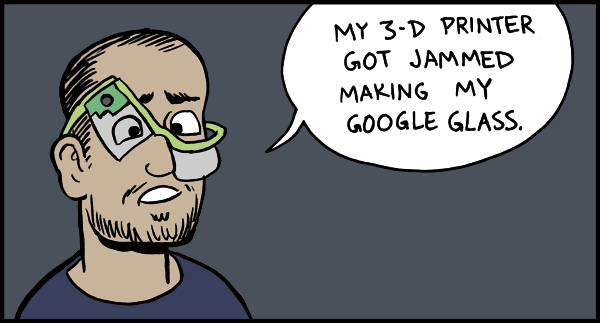 The post-apocalypse and castaway narrative also appeals to our desire to have no rules. Fictional Robinson Crusoe found it was easy to become rich when he had no annoying king taxing his efforts. For us, it’s nice to not have to build our own bridges or poop-disposal system, but its easy to take for granted. And with the speed and adaptability of the internet, its easier to see how slow, and full of red tape and pork belly politics the system can be. Just do away with it, rather than change it. Plus, everyone thinks the rules shouldn’t apply to them, because rules are such a hassle. Cars park in bike lanes, cyclists run red lights, pedestrians walk out into traffic… you’re probably either breaking the rules or fuming that they’re useless. It’s a child’s wish to have no rules, and one that post-apocalyptic prose indulges. You become responsible for protecting your own stuff and friends, but that’s all you have to do. There’s no term paper due, or lines to wait in because you have to take a lunch break the same time as buttload of other people on a 9 to 5 schedule. The only clock you’re on is zombie o’clock. 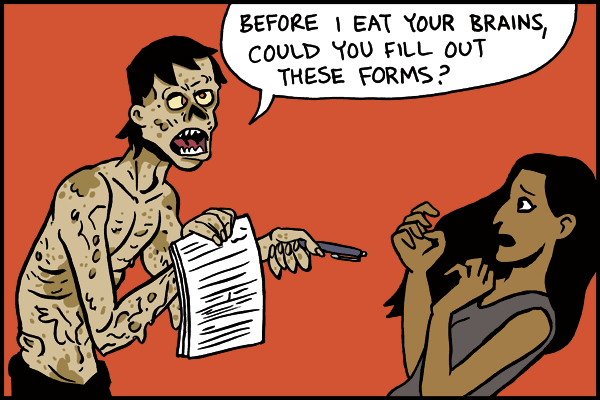 How the story ends needs to be different between castaway and post-apocalypse. In the first, the hero is rescued and brought back to civilization. In the second, salvation must come in another form, be it the discovery of a lush green area, the defeat of slavers, the reaching of a civilized town, etc. That’s not much of a difference.

If you’re not sold on the post-apocalypse as our modern day castaway narrative, then all I can say is go read Robinson Cruose and The Road. There are isolated men, one of whom is referred to as “boy”, basically no women, scavenging (including a big windfall on a shipwrecked boat), slavery, cannibals, and the heroes have a huge freak-out when they discover a footprint in the sand on the beach, that alerts them that they’re not alone.

So, if you were stranded in the post-apocalypse, what book would you take with you?